Writing an Android app for the HVACR market (Part 3).

Writing an Android app for the HVACR market (Part 3).

Part 3 of this series of articles outlining the development of an Android app for the HVAC market focuses on additional functionality added to v3.0 of the app. See part 1 and part 2 of the article for an introduction to the evolution of this app.

The two key additions include additional refrigerants as well as the ability of the app to compute sub-cooling.

Please see part 1 if the article for a brief explanation of how the vapor compression cycle works.

The figure below shows how sub-cooling is measured 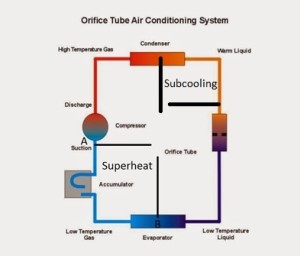 Since v 1.0 of the app focused on target superheat the second page only contained calculations for the actual superheat for the system as computed by the app. With the addition of the sub-cooling calculation the app can now cater to service personnel working on both fixed orifice as well as expansion valve based devices.

Below is a screenshot of the second page in v3.0 of the app. 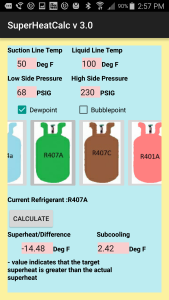 The second column of values show the fields needed to perform a sub-cooling calculation. The high side pressure would the pressure read on the manifold gages at the condenser and the Liquid Line temperature would be the temperature of the refrigerant line taken as close as possible to the expansion device.

The calculate button computes both the superheat and subcooling at the same time. As a precaution against undefined values appearing the results fields the app provides default vales on startup which can then be modified by the user.

In addition two new checkboxes marked “Dewpoint” and “Bubblepoint” have been added. Many of the new refrigerants added to the app are known as blended refrigerants.

When working with such refrigerants the point at which it begins to condense and evaporate are different and are described tow two distinct sets of data. Depending on the equipment manufacturer it is reasonable to use one of the boundary values or an average of both when performing superheat and sub-cooling calculations.

To modify the app the relevant xml layout files were modified to incorporate the new layout needed to encompass the superheat and sub-cooling calculations.

The app may be found on the Google play store at https://play.google.com/store/apps/details?id=com.apps.bmc.superheatcalc