Writing an Android app for the HVACR market (part 2)

Writing an Android app for the HVACR market (part 2)

This is a continuation of the first article which follows the development of the Android app for computing Superheat in HVACR applications. See here for the first part of the article – Link to Part 1

In expanding the use of this app, v 2.1 of the app has been designed to also allow the app to be used by refrigeration service personnel. As explained in the first part of this article the target superheat of an air conditioning system for fixed office devices may be determined by the value of the indoor wet bulb and outdoor dry bulb readings.

However this method is only applicable to air conditioning systems and the wet bulb/dry bulb readings are based on psychrometric theory which pertains to the study of moisture in the air and its related properties. The condition of the air has a major effect on human conform and hence its importance on comfort cooling.

In order to allow the app to also be used by those in refrigeration it needed two major changes.

1. Decouple the target superheat calculation from the IWB/ODB values and allow the user to enter the value manually.

As before best fit equations were developed for the newly added refrigerants – both in Imperial and SI units.
Loking at the first page we now see there is a “Manual Calculation” checkbox. 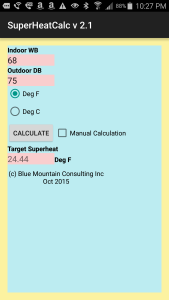 When it is unchecked the target superheat is derived from the IWB and ODB as before when the “calculate” button is pressed.

When the box is checked as shown below the field the entry fields are disabled and the Target Superheat box is enabled allowing the user to directly enter the value. 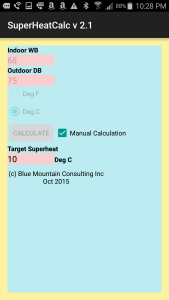 In manual mode the calculation will be performed in the selected units although the unit selection itself will be disabled during this process. In order to change units the user must exit manual mode first.

It is highly unlikely in actual use that the user will switch units during calculations since this is usually determined by geographical regions and is unlikely to change on a regular basis.

The second screen now shows the additional refrigerants in their appropriate icons along with the labels and ASHRAE designated color codes. Since the refrigerant list is likely to grow in the future the refrigerants have now been placed in a HorizontalScrollView which allows the user to scroll through the list. 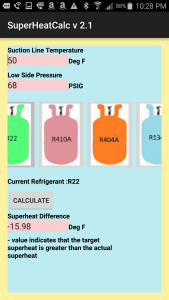 Another consideration is that there is now a need to be able to enter pressure units in “ Hg or negative values in kPa. The reason for this is the evaporating pressure for refrigerants like R134a in low temperature applications can be below atmospheric and the standard imperial units for measuring pressure below atmospheric up to a total vacuum is in “ Hg.

Since the app already sets the units into Imperial and SI on the first screen the default imperial pressure units is PSIG. In order to allow entry into “ Hg the user simply clicks on this field to toggle between PSIG and “ Hg as shown below 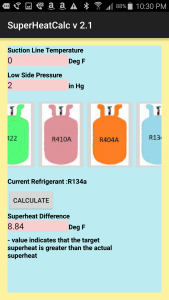 Another improvement to the earlier version of the app is that the correct units of the calculation is also displayed to the right of the calculated field.

The final image shows the calculations performed in SI units. 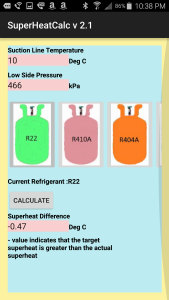 V 2.1 of the app has been designed to allow both air conditioning and refrigeration personnel to use in diagnosing and servicing HVACR equipment.

The app may be downloaded by visiting the Google Play store at https://play.google.com/store/apps/details?id=com.apps.bmc.superheatcalc