Some Considerations of ASIC Clock CTS and STA

Some Considerations of ASIC Clock CTS and STA

Let’s say a design has three clocks, clk1, clk2, and clk3. They are synchronous to each other. The Blog “Turing CTS Recipe”  mentions sometimes during CTS (clock tree generation) we would like to specify, for example, clk1 and clk2 to be synchronous while clk3 to be async to these two. 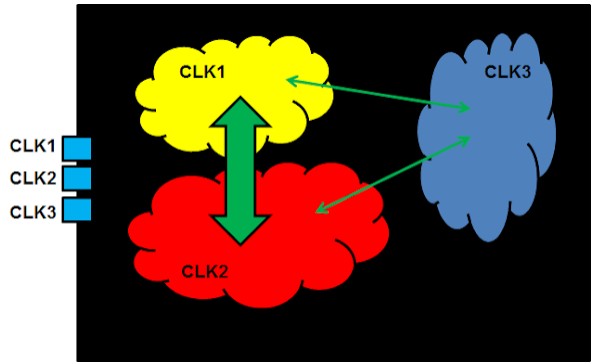 In below two cases,

it is preferred to make clk3 async to clk1/clk2 to fix above clk tree insertion delay issue. But the blog does not mention how to let STA tool to check timing of clk3 to/from clk1/clk2 paths since these paths are still synchronous which is required by design. It is common in timing constraint to specify two clock domains to be sync and define some paths between them are async/false-path. But not the other way around.

The blog also mentions in case there is “clock used as data” case it must be explicitly marked as “exclude_pin” at the beginning of the corresponding data path to guide CTS to exclude anthing further from clock tree balancing. This is very important and yet lots of time still violated. If not marked, CTS can insert quite a bit delay on clock tree trying to balance.

But the blog does not mention what are possible cases of “clock used as data”. One case as drawn in above is clock is connected to register D pin. Why does a designer wants to make such a connection? It is possible the designer wants to use fw to read clock state for debug purpose to see if clock toggles. (But this is a a bad design. For this purpose user can use an div-by-2 circuit to check if clock toggles) Another common case is clock is connected to a debug bus and debug bus eventually goes out of chip or fpga. This case is treated as “clock used as data” in CTS/STA.

Another blog on the same site, False Path vs Case Analysis vs Disable Timing, states “both case analysis and disable timing result in fewer timing paths to be analyzed. False path still tries to fix the design rule (max cap, max transition and max fanout) violations”. Good point. As a matter of fact, backend normally prefers to use MCP (multiple cycle path) instead of false path if possible.

Here is another good blog on the same site, Common Path Pessimism, states “Ideally speaking, for setup analysis, we would like to take the +5% derated value of the delay of these buffers while considering launching path and -5% derated value while considering the capture path. However, here lies the catch! How can the same buffer or set of buffers be derated differently for launch and capture? Recall from the definition of OCV that it is the intra-chip variation in PVT that STA engineers consider them in the first place.”