DMA is widely used to offload processor from resource-consuming data movement. There are two typical usage scenarios, one is between two memory spaces and the other is between memory and a peripheral, aka some hardware module which can receive data from or transmit data to external device. These two scenarios are related. The 2nd scenario can be designed in a way that peripheral first put data into some local memory and then data transfer becomes the 1st scenario since it is between two memories.

Let’s say we want to design a system for the 2nd scenario that DMA is used to transfer data between a peripheral and a memory. Both direction, mem to peri and peri to mem, need to be supported. The peripheral implements FIFO instead of full memory to save space. Before we implement the design, we first think through how it works. For peri to mem direction, peripheral receives data and then dumps to FIFO, once FIFO reaches certain level, asserts request to DMA, DMA then fetches data from peri FIFO and then writes to memory. Sounds good. But at the end of a transfer, likely we don’t have enough data to fill the FIFO to the threshold level so request is not sent to DMA and DMA won’t fetch. Processor will not see the whole data of a transfer. How to resolve it?

Let’s take a look of existing IP for DMA controller and maybe the issue is already resolved over there. ARM processors and AMBA bus have been widely used in industry. For AHB bus based low-end system, ARM offers PrimeCell SMDMAC, single master DMA controller. An user can take a look of PL081 technical reference manual for details. After checking this IP, indeed our above question is resolved.

SMDMAC system level inter-connection can be seen as below. AHB slave interface is for processor to program and configure SMDMAC internal registers. AHB master interface is used by DMAC to read and write data once it becomes active. Interrupt signals are to notify processor DMA transfer is done. DMA request and response signals are between DMAC and peripheral and it is these signals resolving above question. 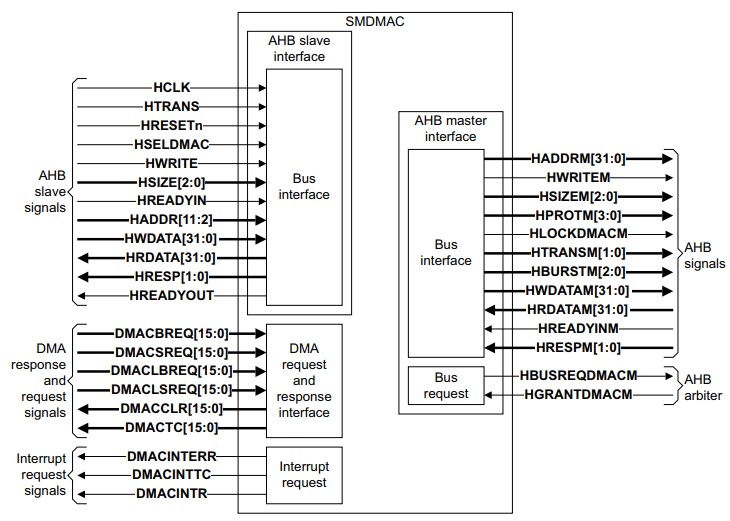 Once again, DMA request and response signals run between DMAC and peripheral. Notice it is NOT just one request signal. There are multiple of them. Here is how above issue is resolved.  On peripheral side, when data reaches certain level in FIFO, peripheral asserts BREQ, block request, to DMAC. This “certain level” in FIFO is normally programmable and must match DMA’s burst transaction size. For example, if FIFO threshold is programmed to be 16, it asserts BREQ to DMAC saying there is 16 word ready. DMAC sees BREQ and will do a burst read. Since DMAC burst size is also programmed by processor to be 16, DMAC will read out exactly 16 word out of FIFO. 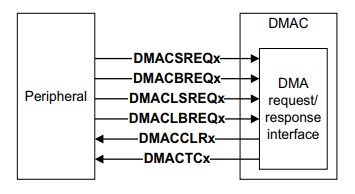 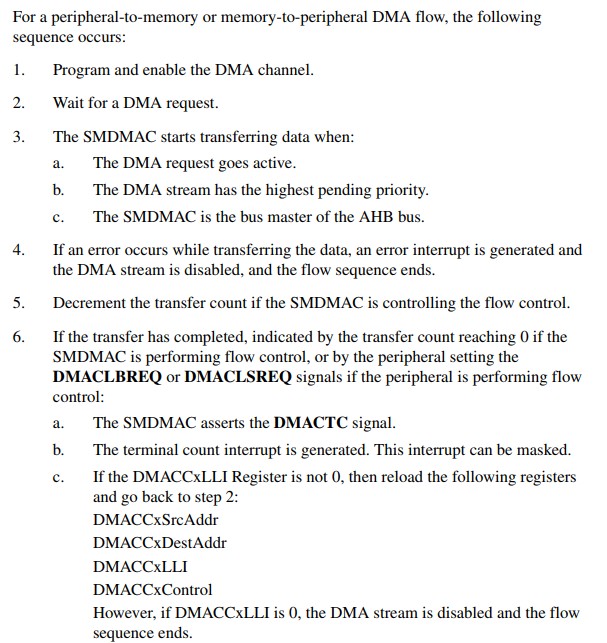 Let’s take a look of real timing. Below shows peripheral asserts one BREQ. DMAC sees it and then fetch data out of FIFO 16 times. But when DMAC writes data into memory, there are only 4 transactions. Something is wrong? In fact for the 16 read of FIFO, each read is only one byte. 16 bytes is 4 words which matches 4 transactions to memory. BTW, SMDMAC has 4 word internal FIFO to save data.

Below is what I mentioned in above that to resolve the issue, after BREQ, peripheral needs to assert several SREQ and then one LSREQ at the end. For each BREQ/LBREQ/SREQ/LSREQ, DMAC needs to clear it, through asserting CLR1, to tell the peripheral the request is served.