In a wireless communication system, a common task is to suppress a spur or cancel a tone. As shown, a spur falls into the in-band of received signal and spur suppression circuit is to remove this spur before the received signal is demodulated. 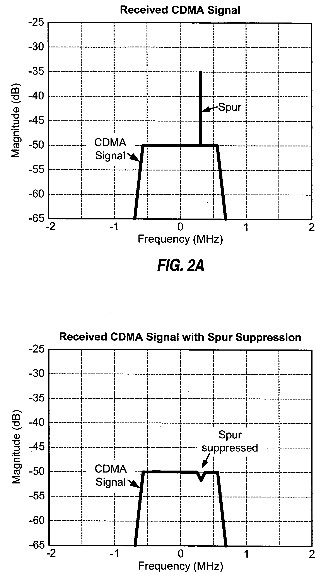 There are lots of algorithms have been development to detect and estimate multiple tones in received signal. Two commonly discussed are the so-called MUSIC (multiple signal classification) algorithm and ESPRIT (estimating signal parameters via rotational invariance techniques). These algorithms are commonly based on SVD decomposition of co-variance matrix and are therefore computational expensive.

Luckily, in wireless receiver, often the spur or the single tone frequency is known. The spur may be due to harmonics of a crystal or a PLL output. So it can be calculated that which harmonics of a crystal freq and FLL output can fall into the received signal band. As a matter of fact, many times crystal freq and PLL output are chosen to avoid spur in desired signal band.

With spur freq known, one design method is to design a filter to filter it out. Since this filter needs to have very narrow bandwidth to avoid filtering out too much desired signal, this filter is normally called notch filter as shown in below. However, implement of a notch filter with very narrow bandwidth is expensive. We are talking about a high order FIR or IIR filter. 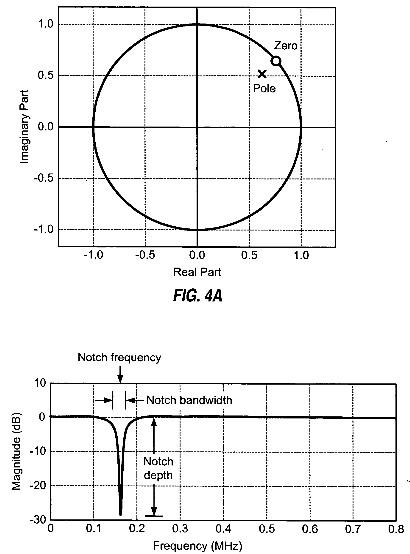 There exists calculation inexpensive way to implement “notch filter”. The key is not to treat the spur as noise and to filter it out BUT to treat it as desired signal, extract it, and then subtract it from original signal.

The following is author point premium content.
You can purchase points of this author. You have 0 points and this post costs 2 points.
Highlights: 381 words, 1 images